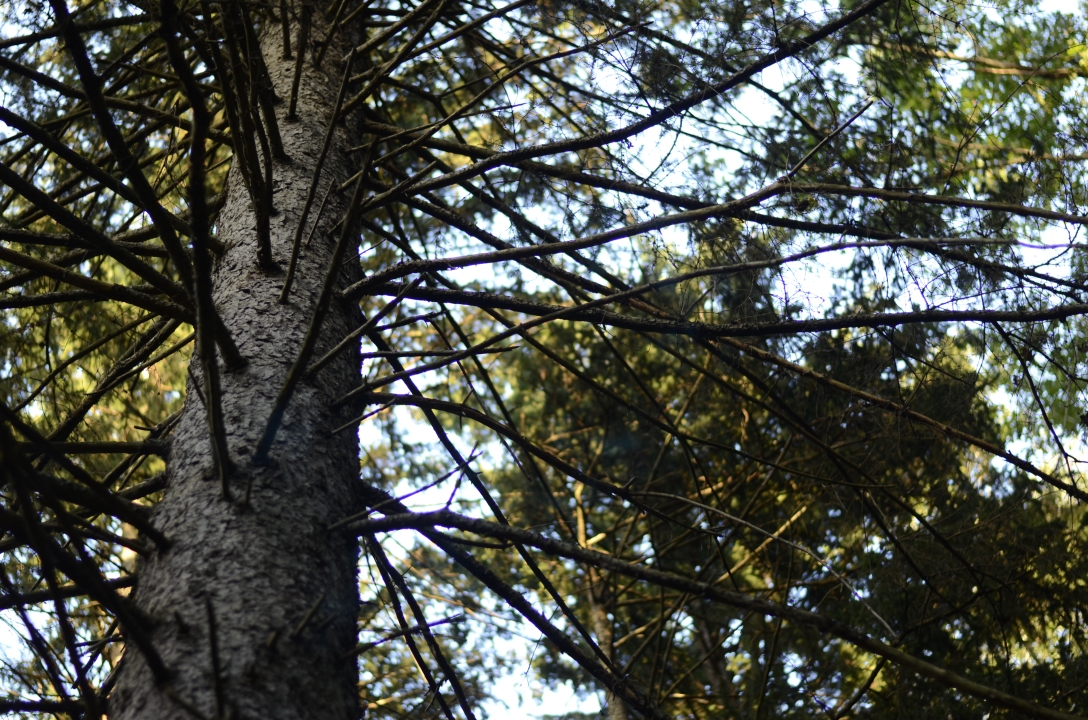 I’ve been glassing branches for birds for nearly an hour. I’ve been seeing and hearing Blue Jays, Robins, Cardinals, Gray Catbirds, Chickadees and even a Ruby Throated Hummingbird but haven’t got what I’ve really come for.

At first I didn’t hear the shrill, flute-like song cascading through the leaves and limbs. Yet, as evening wore on and I strolled further down the trail my auditory world finally began to shine. Field guides transcribe it as something along the lines of ‘bupbup eeeohlay, bupbup aholee’ but no transliteration can do it justice.

It had appeared all of a sudden––as if someone had uncorked a bottle or opened a window. It came, and when it came the world was a better place for it. I was hearing the call of a Wood Thrush.

Unfortunately, in recent decades, Wood Thrush populations have declined by nearly seventy percent. This is largely due to loss habitat and the fragmentation of remnant eastern woodlands as well as the increase of a parasitic species known as the Brown Headed Cowbird. Cowbirds will raid Wood Thrush (as well as other songbird nests), destroy the eggs, and lay one of their own eggs to be raised by the victim. Likewise, in some areas acid rain has contributed to the demise, too due to the effect the rain has on the one of the Thrush’s main food sources––small soil-dwelling invertebrates.

Furthermore, since they winter in South or Central America, the prominence and continued development of monoculture coffee plantations is likewise one of the continued catalysts causing their population to plummet. There are actually some groups combatting this by cultivating ‘shade-grown’ coffee that provides habitat for the Wood Thrush as well as other birds facing the this challenge.

Aware their status of ‘yellow’ on the bird watch lists, I’m excited to know they’re here. On top of their decline, compared to a litany of other songbirds species, Wood Thrushes can be a bit elusive. First, since they do winter in Central or South America, my window of opportunity to see or hear them at all is slim to begin with.

Similarly, although you’ll hear them sing in late evening if they’re perched anywhere close, actually eyeing them is a taller order. They tend to hide in the canopy more than some birds and are a good deal more skittish than say a Robin or Cardinal.

I’ve been conducting an odd sort of pace as I’ve heard a thrush in the trees ahead of me, walked forward, spooked it into changing trees, heard the song above and behind me, and walked back to where I was a minute earlier.

I’ve been praying I’d be able to catch a glance at him through the foliage––with chestnut browns, streaks of black, whites, and mottled chest feathers, they’re truly a pretty picture. It’s the third or fourth pace when I finally spot him flying ahead of me and, to my delight, land on a branch in clear view.

I’ve raised my binoculars and held my breath.

He opens his beak in an inconspicuous fashion but the notes travelling away are worthy of royalty––he’s a peasant with the sweetest voice in the land. After thirty seconds he bolts. I exhale and resound a ‘Thanks, Lord’ as I trace his wings-beats into the oblivion of leaves.

I’m staring through a binocular borne tunnel framed by tree branches and waving grass. Through the weeds I’ve caught a glimpse of a White Tail fawn. I’ve been watching him for a few moments wondering where mom might be. It’s just then I catch her in the left side of the frame.

River Bank Wild Rye is the grass splitting the frame like cracked lenses when I watch them dart and disappear from the clearing into the trees.

Just a few minutes earlier I spotted a Yellow Throated Warbler and watched his wingbeats bounce between leaves until his feet clutched a Sycamore twig high above me. I had a few clear looks at him only to marvel at his colors and crafted feathers. Names of wildlife, birds included don’t always make sense when you actually see the animal. But in the case of ‘Yellow Throated’ Warbler and ‘White-Tailed’ Deer, they’re dead-on.

Later I watch solitary cottonwood leaf, ripened yellow in the summer sun, casually drift down to the river ripples and plunge headlong into the water—though summer roars, fall looms.

I’m awestruck. I’ve had my face set skyward for only a handful of minutes and have witnessed an absolute myriad display of stars, the Comet NeoWise (tail and all) through my binoculars, a triage of shooting stars, a waxing crescent moon, the last crisp colors of sunset and one of the planets burning to the southeast.

I’ve come back to my writing desk and keyed out the scripture that had poured through my brain like a waterfall. No other expression of God’s glory could be more fitting.

The Lord is great and greatly to be praised, how unsearchable is his greatness (Psalm 145:3)

Oh, the depth of the riches and wisdom and knowledge of God! How unsearchable are his judgments and how inscrutable his ways! (Romans 11:33)

The Lord has established his throne in the heavens and his kingdom rules over all… Bless the Lord all you his works, in all places of his dominion (Psalm 103:19, 22)

The heavens declare the glory of God, and the sky above proclaims his handiwork (Psalm 19:1)

The Lord reigns; He is robed in majesty; the Lord is robed he has put on strength as his belt. Yes, the world is established; it shall never be moved. Your throne is established from of old; you are from everlasting… Mightier than the thunders of many waters, mightier than the waves of the sea, the Lord on high is mighty. (Psalm 93:1-2, 4)

All I can say is, “I can’t wait to meet you face to face, O Lord my rock an my redeemer, you are glorious”.

The lovely short story A White Heron, penned in 1886 in coastal Maine by Sarah Orne Jewett, has been on my mind in the past number of weeks. Having read it nearly five years ago, I could conjure up a few details and general themes about it but not the title or the author––it was driving me crazy. After reaching out to my American Literature professor from university, I was kindly reminded of the name.

Clad in its New England setting of wild forests, vast swathes of land, small communities, and an air of a subsistent life, I’m an enthralled reader longing to catch a glimpse a way of life now tragically absent.

In Sarah Orne Jewett’s story, a young girl, acquainted with the wildlife on her land, finds herself before a wrenching decision. A young, wayfaring man enveloped in the hobby and ornithologic practice of stuffing and preserving birds, enquires about the location of a White Heron’s nest. It’s his great desire to acquire the Heron by his gun and offers ten dollars––an ample sum of money at that time––to anyone who could show him the place.

The girl seeks to find out, spending the next dawn breathlessly panting and pawing her way up the monarch tree of the land to gain a vantage point. She’s seen the Heron before but not from whence he came. Yet, high atop a tree in the crisp, atomic Maine morning, in the sea-glint and vast fir forest, in the still stretch of scenery of church steeples, ocean, pastures and trees, she indeed eyes the Heron’s takeoff––from the dead hemlock just away there. In fact, the Heron flies to and perches in the selfsame tree the girl, pitch-footed and sore, has been gawking from. The Heron soon strikes back into the morning sky and the girl races homeward, eager to share the news with the ornithologist.

Yet, upon reaching her homestead she realizes she is not capable of what she thought she would do. She cannot give away the secret, the very life, away of something so beautiful. She does not utter, she does not trade, she melds her lips shut like iron.

Strolling back to my car I’m enthralled by the sunset. I’m still hearing Wood Thrushes in treetops behind me and the electric buzz of insects from the hedge but now I’m transfixed on the purple-pink bouquet of clouds burning in the west.

Having come off the trail and to a gravel road, I’m finally slinking back to my car through the dusk-fallen neighborhood. The western blaze is now framed by silhouettes of roof peaks and chimney stacks and people can be seen inside windows and doorways. Televisions light their rooms as some stranger’s false, perfect life dances across their eyes.

I reckon we ourselves have made a regrettable trade or two; we’re fools for it.

View all posts by Luke Ingles